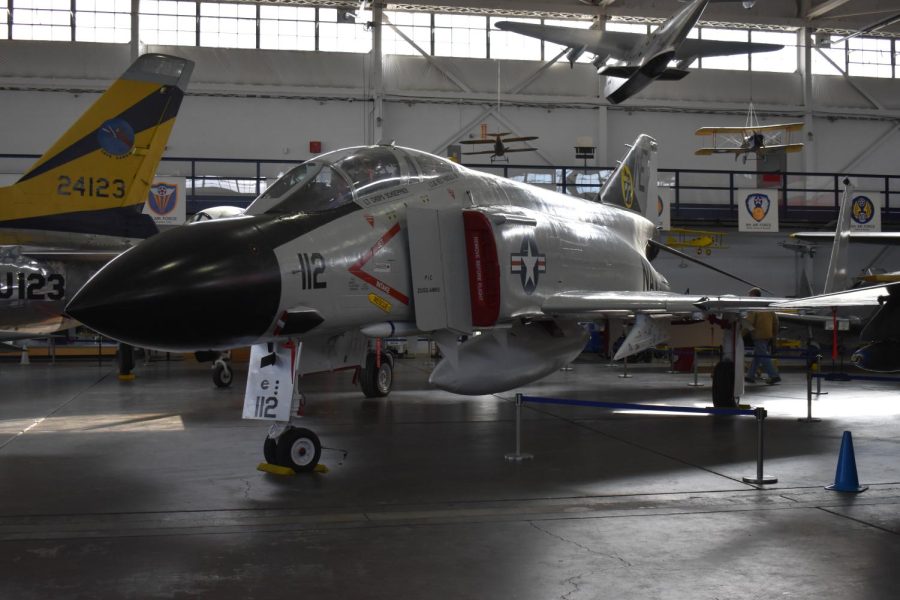 Lieutenant [Junior Grade] Rex Lewis Parcels and Canton native Lieutenant Leonard John Schoeppner went missing in action on March 9, 1970 during the Vietnam War after their plane crashed in the Gulf of Tonkin. This November, the MAPS Air Museum dedicated the F-4 Phantom II in their memory.
Throughout the ages, the Military Aviation Preservation Society [MAPS] has continued to keep the history and the stories of the fallen for many years. Mr. Reed Kimball, Education Director at the MAPS Air Museum, elaborated about the importance of MAPS.

“MAPS exists to tell the stories of those that have come before us, to tell the stories of those that can no longer tell their own,” he said. “If we fail to remember them, their service and sacrifice will disappear.”
In order to preserve the memories of those who have fallen, the MAPS Museum has many fascinating exhibits to tell the stories of many veterans. Hoover High School history teacher Mr. Dave Burtscher went into depth.
“Military Aviation Preservation Society is a hidden treasure in Stark County,” he said. “Many people do not know what it is or where it is located, but it is an amazing museum dedicated to preserving aviation history and diffusing this knowledge to the public. Not only is it an evolving and expanding museum, it holds many social, charitable and fundraising activities/dinners/breakfasts and shows that aid the community and also give exposure for the museum.”
A major event at the museum is The MAPS Veterans Celebration. Mrs. Valerie Kinney, organizer of this event, described this event.
“The MAPS Veterans Celebration is an annual event to recognize and honor our veterans from all wars,” he said. “It includes dinner and a program. The event in November included a dedication of our newly restored F-4 Phantom that flew on the USS Ranger in Vietnam. It honored two individuals that went MIA on March 9, 1970. LT Leonard “Jack” Schoeppner from Canton Township and LTJG Rex Parcels from Berkley, CA. We wanted to remind people that there are still MIA from Vietnam. Seventy-five of them are from Ohio.”

Organizing such an important event requires much preparation. MAPS employees, such as Kinney, dedicated many hours to make this happen.
“We identified who we wanted to honor,” she said. “The Navy had to give us permission. The Restoration Crew had to research the aircraft…every little detail possible. They had to design and fix what was missing, paint, detail, etc. Thousands of hours and thousands of dollars. While they are doing that, I am researching the stories, planning the event for 300 guests, creating videos, making flyers, reservations, interviewing, etc. Hundreds of hours all wrapped up into an hour and a half program. The Canton Local Schools provided their sixth-grade choir and Sound of South, representing Schoeppner’s hometown.”
Overall, this event turned out to be quite the success. The Phantom took a lot to restore, but the hard work was worthwhile. Kimball explained the correlation between the plane and the soldiers.
“Leonard flew F-4s when he was assigned to VF-21 [an aviation unit in the Army] and was flying one when he and Parcels were lost,” he said. “They both flew the F-4 that is on display at MAPS three days before their fateful mission.”
The pair of flyers disappeared over North Vietnam while flying a photo reconnaissance mission. They are still considered missing due to their bodies being lost in the Gulf of Tonkin. Now, the Phantom jet lies in the MAPS Air Museum in their memory.
All in all, the museum has an enormous impact on the Stark County community.
“We are here to educate the public on military aviation and its impact on man,” Kinney said. “We also want to honor those who have donned the uniform every day, just not on Veterans Day.”
In short, American citizens as a whole should honor veterans of the U.S. military. According to Burtscher, they have put their lives on the line in the fight for freedom, and their stories can teach people many lessons.
“Our war veterans are becoming a smaller group with the passing of time,” he said. “Having these veterans serving as tour guides who take great pride in teaching military history to younger generations is a blessing. Also the recording of oral and video histories with these veterans is a valuable tool for people to learn and appreciate this history at the museum. This is crucial to maintaining and continuing the legacy of these veterans and to show how impactful their sacrifices and service [are] and will continue to be upon our nation.”